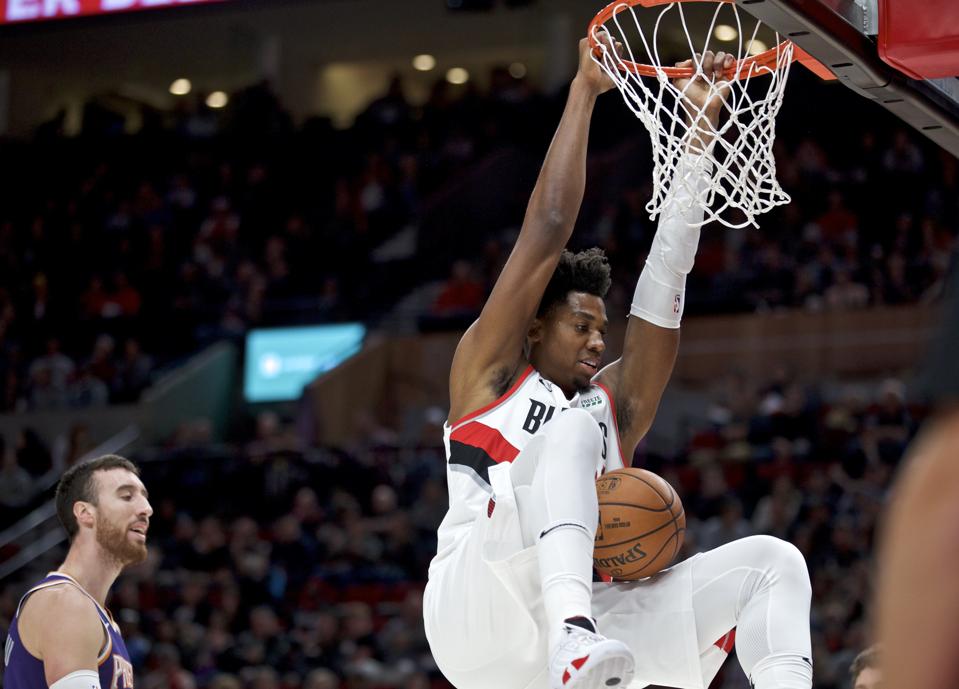 The Portland Trail Blazers kick off the 2019-20 season Wednesday with a home game against Denver, the team they beat in a classic seven-game playoff series last season.

The season is a milestone one for the Blazers, who are celebrating their 50th anniversary season. But the real excitement is about what the team wants to accomplish on the court, with talk about wanting to win a championship, something that defies the expectations of national pundits.

With backbone guards Damian Lillard and CJ McCollum joined by a batch of new faces, the Blazers’ early expectations are still a little cloudy. Here are a three things we’ll be watching early in the season:

How healthy is this team? An early concern is the health at center, where Hassan Whiteside left a preseason game against Utah after he re-aggravated an ankle injury he wrestled with all preseason. The Oregonian’s Joe Freeman reported that Whiteside intends to play in the opener, but he will surely be tested by Denver center Nikola Jokic, who is drawing some early MVP talk and was an absolute handful in the series against the Blazers, averaging 27.1 points, 13.9 rebounds and 7.7 assists.

With veteran Pau Gasol, who did not play at all in the preseason, recovering from his surgically-repaired left foot, and Jusuf Nurkic still months away from returning from the hideous compound leg fracture he suffered on March 25, Whiteside being healthy and productive will be a huge factor in the Blazers’ early fortunes, and certainly a key against the Nuggets.

One other health question is about forward Rodney Hood, who sat out a preseason game against Phoenix with back spasms. Hood returned to play 12 minutes to the exhibition finale Wednesday and appears ready to be in the starting lineup against Denver.

What form will bench take? With Hood and Zach Collins moving into the starting lineup, it remains to be seen what Portland’s bench will be like. The improvement in Portland’s bench scoring last season, to 34.9 points per game after averaging 27.6 in 2017-18, was a major factor in its 53-win season.

It appears the Blazers will look to push the ball with the second unit, with newcomers Mario Hezonja and Kent Bazemore, and the returning Anfernee Simons all capable to igniting a fastbreak after opponents’ misses.

Hezonja seems primed to be a primary ball-handler even more than Simons, who is essentially the point guard. Hezonja led the Blazers in preseason assists at 3.6 per game, and his ball-handling could be a boon for Simons if the second-year guard can continue his torrid preseason 3-point shooting (11 for 22).

Last season’s second unit relied heavily on assists for scoring and was the primary reason the Blazers did not repeat the assists dearth of 2017-18, when they were dead last in the league at 19.5 assists per game.

Although Lillard and McCollum have long had a high rate of unassisted field goals, it was the bench that accounted for much of the improvement in assists last season, when Portland averaged 23 per game – with 2.4 of the assists improvement coming from the bench.

Can Portland be a better road team? The question has some urgency as after Wednesday’s opener, the Blazers play six of their next seven games on the road.

Easily forgotten about 2018-19 is that Portland, for much of the season, was a mediocre road team, only salvaging a 21-20 away record by winning six of its final nine road games. Along the way they took some truly hideous road losses, including by 43 at Milwaukee, the sixth-worst loss by margin in franchise history.

The Blazers did manage to establish a strong homecourt advantage, finished 32-9 in the Moda Center. And they won three road games in the playoffs, including in Game 7 at Denver.

Still, the Blazers need to be careful not to have to lean so heavily on home during the regular season.