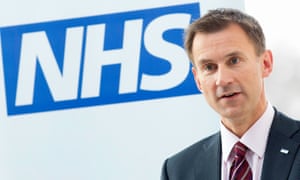 Jeremy Hunt has been elected by the House of Commons as the new chair of the health and social care select committee. This is a profoundly worrying development but has generated curiously little reaction, even in the bearpit of social media. At least the now-ex Labour leadership hopeful Jess Phillips called it right when she tweeted: “I have no idea how Jeremy Hunt, newly elected health and social care select committee chair, can properly scrutinise the government on health policy and practice when much of it will have been his doing.” Precisely.

Chris Grayling, the former transport secretary, would be a wholly inappropriate chair of the transport select committee, as would the ex-chancellor, Philip Hammond – if he were still an MP – at the treasury select committee. Their recent cabinet roles would debar them. So how is it acceptable for Hunt, (health secretary 2012-18) to chair the select committee scrutinising what until 19 months ago had been his department for six years? It is not acceptable at all. It is scandalous, because it involves a clear, visible and multi-faceted conflict of interest that threatens to neuter the work of an until now inquisitive, influential and effective committee.

Select committees do important work holding the government to account, but, as one ex-committee member muses, “It’s all about his ego. He wanted the job because it would give him some status. I suspect his ego meant he couldn’t have taken being just a backbencher. And given he was health secretary for so long, Hunt will clearly be marking his own homework.”

After seeing off fellow Tory Anne-Marie Morris to land the role last week, Hunt pledged that under him the committee would “provide a strong, independent voice that supports NHS staff and patients in a very pressured period”. But it is impossible to see how he can provide the necessary independence of thought. This is not because he will be too party political in the role. It is because what he did or didn’t do in his six years will come up time and time again in the committee’s inquiries, leaving him – and it – hopelessly compromised. Witnesses may be tempted to hold back for fear of embarrassing the chair, especially those from NHS bodies and his old department. Politeness may also dictate that MPs on the committee do not interrogate certain matters too closely for the same reason.

Hunt’s four priorities as chair will be patient safety, mental health, the NHS workforce and social care. But what credibility will he have questioning witnesses on Johnson’s pledge to boost GP numbers in England by 6,000 when his own promise in 2015 – 5,000 more by 2020 – did not materialise? And with what authority will he examine the mooted scrapping of the four-hour A&E target when performance against all the NHS waiting-time standards collapsed on his watch?

This isn’t going to end well. The committee will struggle to do its job properly with Hunt as chair. The NHS, the public and democracy itself will be ill-served by this elephant in the select committee’s meeting room. The committee plays an important part in a health policy process. I fear that it will be hopelessly hamstrung.