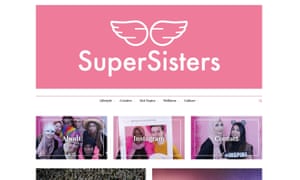 The revelation about funding of the project has led to a row between its owners, a former Muslim employee and its Muslim audience.

SuperSisters was built in 2015 by J-Go Media, a company of nine staff members from east London that describes itself as “a not-for-profit community group” and has two decades of experience of engaging with Muslim communities in East London. SuperSisters is promoted as a “global platform for young Muslimahs in east London to share and create inspiring and empowering content”.

But after realising that recent funding for the project was coming from Building a Stronger Britain Together (BSBT), an arm of the government’s counter-extremism strategy, readers expressed anger and accused its directors of betraying the Muslim community. Two Muslim employees have since resigned.

Sabah Ismail, a social media manager for SuperSisters from February to August this year, said: “In my naiveity, I thought that through this ‘opportunity’ at SuperSisters, I really could help to make real change, pushing forward a different narrative from Muslim women themselves, showing that we are empowered and multi-faceted … I realise now that with the Home Office funding the project at the root, there was no way I could do this, regardless of the content I was pushing out.”

SuperSisters was conceived by J-Go in response to Shamima Begum and two other British schoolgirls running away to Syria in 2015. The project secured funding from Prevent, the National Counter Terrorism Security Office’s controversial strategy, which was set up to stop people becoming terrorists or supporting terrorism. Prevent has repeatedly faced claims of state-sanctioned spying on Muslims and is currently under independent review.

J-Go’s directors, Jon Hems and Jan Bros, stated: “Where we acknowledge we went wrong, and we apologise for it, is not more clearly stating the source of funding on the SuperSisters Instagram and blog, not just our [parent] website [J-GoLtd.com].”

According to J-Go, “countering extremism for us is about sharing an alternative narrative to highlight positive stories coming from a diverse contributor network”.

However, SuperSisters is left battling the widespread suspicion that it was purposely designed to promote a state-approved notion of the Islamic faith with the potential to track its target audience of British Muslim girls aged 13 to 19. One reader, Aeysh Ahmed, wrote on Instagram: “I am actually shocked … it’s deeply problematic that non-Muslims feel they have the right to define what our unified identity is.” Another user, @the_hybrid_life, said: “This is truly shocking and disturbing and feels entirely like a violation.”

Former contributors have claimed that at one point there were no Muslim women employed by J-Go working on the editorial for SuperSisters, while still giving readers the impression that this lifestyle site covering health, politics and current affairs and poetry was made for and by young Muslim women. J-GO deny this and stated: “There were Muslim women on the team the entire duration of the project … We have never claimed to be a platform made by Muslim women … our ‘SuperSisters’ are the women and girls we’ve featured on our page.”

But Ismail confirmed that she was surprised to find there were no Muslim women in the editorial or creative team when she joined, and that “despite [J-Go] running a project for Muslim women, most of the team were far removed from the principles of Islam, some even disagreeing out-rightly with our beliefs”.

She worked on the project under the lead of a non-Muslim, female creative producer who ran SuperSisters for two years and prior to joining J-GO, had tweeted: “I can handle religion if you’re not involving me in it and its not causing world wars, terrorist attacks or homocides. Oh wait…”.J-GO has been rocked by the resignations of two members of its Muslim staff last month and has suspended activity on its blog. Ismail says she felt “used” as “a female Muslim puppet” to legitimise the project and in her final month, was given a managerial role running SuperSisters while still only being paid the London Living Wage (£10.55 per hour). Amid producing videos, articles and social media posts, Ismail used religious text quoting the Prophet Muhammad in content designed for a Muslim audience. One day she turned up to work to find “all that was taken off the site and archived. They said they wanted to do away with anything overtly Islamic”.

It has been reported that state agencies have been actively involved with online propaganda targeted at Muslim citizens by offering “counter-narratives” to what they consider radical Islam. The Home Office’s Research, Information and Communications Unit, or Ricu, has worked extensively with PR agencies and new media companies since 2007 to target those who fit the profile of vulnerable young Muslim.

J-Go declined to comment on whether they had ever worked with or for Ricu but admitted erasing some of Ismail’s posts, and told the Observer: “We acknowledge that J-Go is not an Islamic organisation in either mission, majority staff composition or majority leadership composition. We therefore do not believe we have the credibility or authority to post passages from theological texts.”

Aside from its online presence, SuperSisters was also funded to organise workshops and events aimed at British Muslim girls in east London. J-Go denied this was a data capturing exercise and said: “There are two forms which we ask attendees to complete during the workshops. The first is an attendance sheet. As part of our safeguarding policy for supervising children under 18, we ask that parents put in their postcodes in case we cannot locate the parent in an emergency … it would be incorrect to imply that the SuperSisters project could ever be a data capturing operation. We do not have the resources, motivation or requirement to do that.”

Yet the scandal at J-Go comes after another media company, which claims to “counter fake news and champion authentic voices”, was exposed last month by Middle East Eye for creating a social media network called This is Woke, targeting young Muslims on behalf of the Office for Security and Counter-Terrorism (OSCT). The staff, working under Breakthrough Media, which has subsequently been rebranded as Zinc Network, have been bound by the Official Secrets Act. The company, located near Westminster, is closely aligned to government and has been key to the delivery of multiple RICU projects. The Home Office declined to comment on this case, claiming that national security concerns were “of overriding importance” against public interest in transparency surrounding its counter terror and extremism projects.

Suhaiymah Manzoor-Khan, an activist and poet who withdrew from the Bradford Literature festival in July after learning it was also funded by BSBT, describes the Home Office’s practices as “shadowy” and “racist”. She said: “[It matters] because not only our public institutions, but our media platforms, arts and culture events, civic life and social lives are being targeted at every level because we are Muslim. This is what decimates trust. Who and what are we supposed to trust for information or opinion or insight when our identities and experiences are being violently coopted and repackaged to us in the name of “protecting” us?

“At every level of every institution, the idea that Muslims are all at risk of perpetrating violence has been enshrined in the name of security and is causing the mass surveillance and targeting of us across the board. This is Orwellian.”

BSBT has awarded more than £9m to organisations since 2015. The Home Office said: “BSBT is an open and transparent programme, which supports local people in their vital work to bring communities together, promote fundamental values and tackle the spread of all extremist ideologies.

“The Home Office has provided BSBT grant funding for the SuperSisters project since 2018 to provide support for Muslim women.”

Tags: 'Lifestyle', by, covertly, for, funded, Home:, Is, Muslim, Teens, the, website