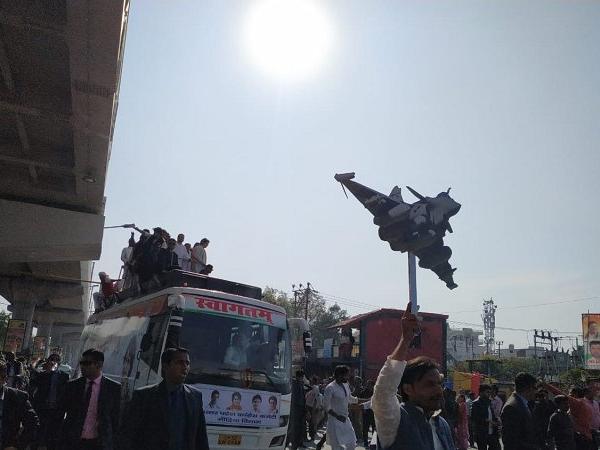 Lucknow came to a standstill on Monday during the first roadshow by AICC general secretary UP East, Priyanka Gandhi Vadra.  |  Photo Credit: ANI

New Delhi: It was a maddening Monday when it came to the political spectrum of India as Priyanka Gandhi Vadra’s Lucknow roadshow brought the city to a standstill, Arvind Kejriwal said that PM Narendra Modi was behaving like a Pakistan Prime Minister and Rajinikanth’s daughter Soundarya married Vishagan Vanangamudi. Here are the day’s biggest news headlines:

In a controversial statement, Delhi Chief Minister Arvind Kejriwal on Monday called PM Narendra Modi the “Prime Minister of Pakistan”, accusing of him of mistreating states run by governments of opposition parties. Kejriwal made the comment while addressing the crowd at Andhra Pradesh Chief Minister Chandrababu Naidu’s day-long hunger strike in New Delhi. The Aam Aadmi Party leader said, “When one becomes the PM, then he is the PM of the entire country, not just one party. “The way PM Modi treats governments of opposition parties in states, he behaves like he is not the PM of India but PM of Pakistan.”

Lucknow came to a standstill on Monday during the first roadshow by AICC general secretary UP East, Priyanka Gandhi Vadra, who was accompanied by Congress President Rahul Gandhi. Many could be seen chanting ‘Rahul, Rahul’ at the show of political power.

After an intimate pre-wedding bash Rajinikanth’s younger daughter Soundarya Rajinikanth and actor-businessman Vishagan Vanangamudi have now tied a knot in the holy matrimony. The beautiful couple who were embracing the wedding festivities is now husband and wife. The wedding festivities were carried on in a full swing and these beautiful photos from the do are the proof of their fairy tale romance.

Indian leg-spinner Kuldeep Yadav moved one place up to attain career-best second spot in the ICC T20I rankings as per the new list that was released on Monday. Kuldeep played only one match in the three-game T20I series against New Zealand where he finished with 2 for 26 in India’s four-runs defeat to go 1-2 down in the contest. Meanwhile, stand-in skipper Rohit Sharma jumped three spots to take the seventh spot on the batting list following his run tally of 89 runs in the series which includes a half-century.

Mukesh Ambani, the billionaire Chairman of Reliance Industries Ltd (RIL), has been believed to be visiting Siddhivinayak Temple in Mumbai on February 11, 2019, along with his wife Nita Ambani. The Ambanis were likely to offer the very first wedding invitation of Akash Ambani and Shloka Mehta at the temple today.

A new leak has suggested that the Samsung Galaxy S10 and Galaxy S10e will come with triple and dual rear camera setups, respectively while both will sport the Infinity-O display with punch-hole front cameras. The leaked image also shows Samsung Galaxy S10e, which is going to be the most affordable offering in the lineup, with noticeable bezels on both the sides.

Successful weight loss strategies: 5 tips to stick to your fitness plan and get rid of belly fat quickly

Even short periods of accidental overeating can cause weight gain or hinder your ability to get rid of that stubborn belly fat. If you’re trying to lose a few extra kilos, adopting these simple strategies can help you stick to your weight loss plan and get great results!