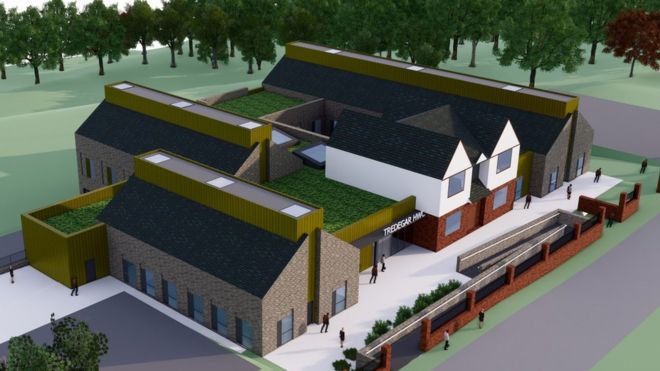 Part of a public park could be sold to a health board developing a £10m health and wellbeing centre.

The so-called “super surgery” on the site of the former Tredegar General Hospital would take over land currently used for sport at Bedwellty Park.

Blaenau Gwent council officers say most people welcomed the plans in consultation, despite some concerns about parking and loss of land.

Council bosses are being urged to sell the land and reinvest any proceeds.

The centre is planned to open in 2022, serving thousands of patients, according to the Local Democracy Reporting Service.

An area of Bedwellty Park including a playing field, recreation ground, sports facility and football ground has been earmarked as part of the development.

Aneurin Bevan University Health Board suggests using the land for a “wellbeing active landscape”, allotments to grow healthy food, and a green plaza, while keeping play facilities at the site.

A report to the council’s ruling executive said local residents welcomed the improved access to services, although some concerns were raised over parking.

Planning officers said the scheme could also make “a positive contribution to Bedwellty Park as a tourism and leisure attraction”.

However the Friends of Bedwellty Park have raised concern over the loss of some of the land in the park, the report added.

Blaenau Gwent council currently owns the land as charitable trustees, with a covenant in place “to keep the land for the purpose only of public walks and pleasure grounds for the use and benefit of the public”.

Officers say if council bosses agree to the idea of selling the land, another report would be drawn up to examine whether the health board plan is compatible with the covenant.

The new centre will have a focus on “pharmacy first” to help reduce demand on GP and clinical services.

It will retain part of the old general hospital, whose management committee was once chaired by Aneurin Bevan, the Labour minister who founded the National Health Service.