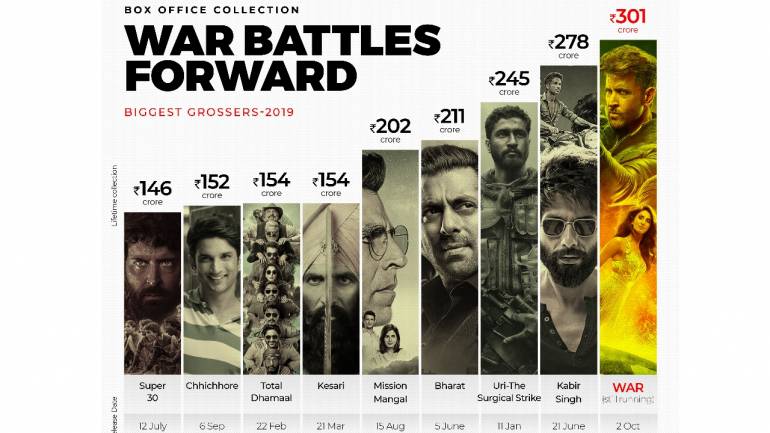 In the past few years, two things have been increasingly discussed in the film industry. First, if star power alone can guarantee a hit film. Second, whether big ventures are needed at a time when small and medium size films are seeing strong returns at the box office.

However, the most recent success of Hrithik Roshan and Tiger Shroff-starrer ‘War’ has shown that while these two factors cannot be a success formula, they surely are big box office draws.

Talking to Moneycontrol, film and trade business analyst Girish Johar said, “It (War) clearly shows that star power is important. No doubt content is the backbone but India is a star-driven market. People come out to watch their stars.”

Johar is not wrong when he says that India is a star-driven market. Tickets to movies featuring mega stars like Shah Rukh Khan, Salman Khan and Amitabh Bachchan often sell simply by virtue of these big names.

This is why Thugs of Hindostan opened at Rs 50 crore but tanked at the box office later due to weak content.

Same was the case with Salman Khan’s Race 3 that managed to attract a large audience during the Eid holiday but could not maintain the growth momentum.

The lesson to learn here is that quality content along with star-power is the right mix for a profitable venture, the latest example being ‘War’.

Plus, the Rs 170 crore film also signals that tent pole or big-ticket movies are also needed to drive audiences in big numbers to the movie halls, while at the same time infusing confidence in the movie business. They also pave the way for small and medium size films.

“2019 has been a fantastic year for film business and the super success of War reiterates the fact that well-made, star driven, commercial films targeting a pan-India audience, will always be embraced warmly by cinema-goers. War has kickstarted another massive franchise, we are now looking forward to YRF green lighting War2,” said Kamal Gianchandani, CEO, PVR Pictures.

The success of War has in fact saved the day as the new small and mid-size releases could not stand tall at the box office.

“We started quite well in October. If you see previous three quarters, we have seen 15-20 percent jump and looking forward that the last quarter witnesses the same. War has maintained the momentum but after War there were two dull weeks,” said Johar.

“We have lost around Rs 140 crore in just two weeks and to recover Rs 140 crore we need more than Rs 300 crore box office. So, that’s not been good for the industry. But with Diwali around and the release of three good films, I am hoping we should be back on track. If we maintain the momentum this would be highest year so far, the Indian film industry has seen,” he added.

According to trade experts, makers of War are seeing a 100 percent return on investments. The film has been made at Rs 150 crore, including talent cost, with print and advertising taking it up by Rs 20 crore. From their India business, the makers are likely to earn Rs 140 crore and around Rs 40 crore from international markets.

Plus, the sale of digital and media rights of the film will fetch Yash Raj Films another Rs 150 crore which saw a mark up of Rs 25 crore after War entered the Rs 300 crore club.

Profits are likely to increase with few more days left for War to mint some extra monies before Housefull 4 and other Diwali releases hit the theatres.

“Now, the pre-Diwali period has set in so movie-going tends to become slow. Yet, it (War) should have Rs 10 crore to Rs 15 crore in the offing. If they maintain screens during Diwali it could earn few more crores,” said Johar.

Overseas, War is consolidating its position as the film has touched the Rs 100 crore mark.

Amid the ongoing slowdown, the film industry has maintained its grip on business which is a good news for the economy as well as movie-goers because they are getting quality content to watch. Now, the aim is that films continue to entertain people in the next two months which are crucial for the movie business.